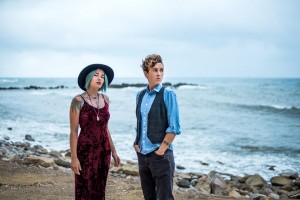 This Thursday night at Fingerprints, local music lovers will have a chance to hear the songs Bearcoon will soon be playing nationwide. Solange Igoa and Andrea Walker, who are revving up for Bearcoon’s first-ever tour, will be presenting offerings from their newly released debut album, “El Guapo.”

“We can’t wait to hit the road,” said Walker, the guitar-playing, songwriting half of Bearcoon. “We’re ready to let go of our day jobs and make an honest go at making a full-time living from our music.”

END_OF_DOCUMENT_TOKEN_TO_BE_REPLACED 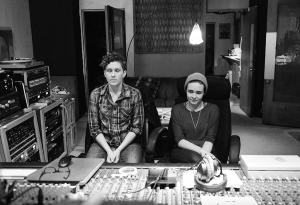 Bearcoon’s Andrea Walker (left) and Solange Igoa (right) listening to a playback at The Compound. Photos by Lindsey Ingram.

Buskerfest is the end-of-summer grand finale of the Summer And Music concert series, which was created by Justin Hectus and Fingerprints Records owner Rand Foster. “The original idea of Buskerfest was to feature simple, stripped-down live music,” says Foster. “In an age of gimmicks and stylists, it’s great to have a band succeed on the strength of their songs and a dynamic live performance.”