Bearcoon have created a truly remarkable debut record that is, in our opinion, this year’s best album. The acoustic folk duo consists of Solange Kaye Marie Igoa on lead vocals and Andrea Walker on guitar and vocal harmonies. Their album titled El Guapo is a collection of poetic lyrics combined with spellbinding harmonies. Like all great recordings, several themes run through and bind the overall sentiment of relationships, love and loss. The redemption of hope is the silver lining in this profoundly heartfelt collection of recordings. 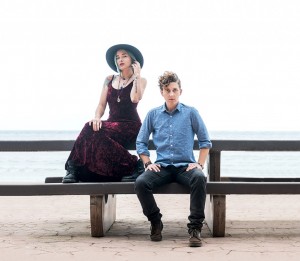 The theme of loss runs from the beginning track through to the end of the album. The tracks run the gamut from beautiful laments to intense anger. Cold Steel of Night, Darkest Corners, End of Days, Waking Eyes and Whiskey are sonic parallels to the emotional roller coaster ride that loss creates.

The silver lining is love compensating for loss. The redemption of love and hope can be found in the tracks It’s Just You and Me and Walk With Me. The latter includes the lyric, “I’m going nowhere but if you like, you can walk with me.”  A great metaphor of the formative steps in a new relationship.

Buffalo is the hopeful, dark horse track.  A premonition track for the band as they keep the dream alive by taking the music on the road. The  beautiful, earwig melody sticks in your head. It’s our favorite track on the record. For us it pinpoints hope as the catalyst to fulfillment.

The album was produced and recorded by Anthony “Antoine” Arvizu at The Compound Studio in Long Beach, CA. The recording session was a prize that the band received after winning Buskerfest (music festival)  in 2014. The record’s success lies in Andrea showcasing her well rounded skills as both a classically trained guitarist and amazing picker, coupled with Solange’s strikingly beautiful vocals. The two are authentic and highly skilled in creating some of the most spellbinding harmonies you’ll ever hear.

After appearing live in front of a worldwide audience on Geek & Sundry’s Twitch TV channel, the band sold out of physical copies of their music on the CD Baby website and also achieved the #1 position on Amazon’s New Folk Releases chart. The band was so popular on the Twitch channel that they became the first act ever to be asked back for an encore performance.The band is currently on a west coast tour and are headed back to Long Beach to record their second album. They have already previewed some of the amazing new tracks in live performances. Bearcoon may very well have another Album of the Year contender.